The flood problem of the state is further aggravated due to flash floods by the rivers flowing down from neighbouring states like Arunachal Pradesh and Meghalaya. During the year 2004 and 2014 the south bank tributaries of Brahmaputra in lower Assam, experienced flash floods of high magnitude due to cloud burst in the catchment areas in Meghalaya. During the month of August, 2011, due to cloud burst in the catchment area of Arunachal Pradesh the river Gainadi and Jiadhal also experienced flash flood of very high magnitude. These flash floods caused large scale devastation in vast areas including losses of human lives.

Breaches of embankment due to bank erosion by the rivers have become a common phenomenon. New areas are being affected by erosion every year. The riverine fertile agricultural lands of the state are reducing due to erosion, which has a very negative impact on the rural economy of the state.

The extent of damage due to bank erosion is alarming in nature which can be seen from the following table (as assessed by the Revenue Department): 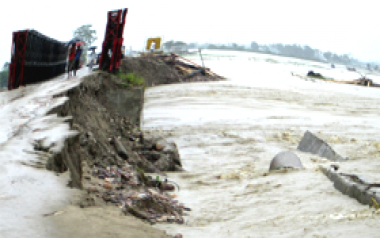